Home » Charts » Poetry » I DO NOT LIKE THAT HILLARY CLINTON

(to be read with a rap-like beat!)

She messed with our nation’s security.

For power and money, she always had a thirst.

That she’s not in jail, fills me with awe.

She kept a private server on her bathroom floor

Something no official has ever done before.

But I think it’s pretty clear that she broke the law.

Then, she wiped it clean and that’s not right.

I hope James Comey recommends that they indict.

This kind of behavior is really nothing new

If Hillary’s past history gives us any clue.

Before she was first lady of this land,

Trading cattle futures, she made a hundred grand.

Now, this requires a suspension of disbelief.

Our future president appears to be a thief.

She claims to be a friend of the little man

But look what happened when she took command.

At the White House travel office, she fired them all

And filled it with her cronies from Arkansas.

She messed up people’s lives, she thought it was her right.

But after all the uproar, she got off light.

And that she always stands up and fights.

She says that rape victims must always be believed.

Let’s look at the treatment Bill’s accusers have received.

She dismissed their testimonies - she turned and ran

Worried that their stories might thwart her future plan.

Monica Lewinsky was her opportunity

To gain some major leverage with the powers that be.

Her willingness to stand by Bill through it all

Turned out to be her springboard to the Senate Hall.

Then it was time to run for president.

That she lacked charisma was quite evident.

She stumbled badly then she lost the primary.

Barack was aware he’d made an enemy

And if he planned to govern in harmony,

He had to do something to moderate the hate

So he made Hillary the Secretary of State.

Can you think of one thing that Hillary’s achieved?

One major global conflict that she relieved?

But she racked up lots of miles in her private jet.

As the middle eastern madness became a far worse threat.

At a campaign stop back in twenty-0-eight,

And these are the things that I really hate,

Said she landed in Bosnia under sniper fire

But it turned out old Hillary was just a liar.

Unfortunately for Hill, there was a video.

When she realized she was caught, she said that she misspoke

That we’re supposed to buy this, has to be a joke.

Brian Williams got sacked for the same offense

And let’s not forget about the Clinton Foundation

Where a thug can buy a favor with a big enough donation.

I’m tired of the Clinton’s, all of them.

Chelsea, Bill and Hill and their grandchildren.

Donald Trump is not ideal, but he’s our nominee

I’d rather see him as president than Hillary. 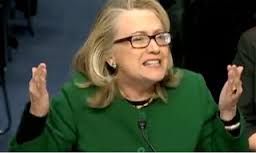