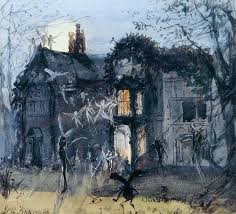 It was the wee hours of the morning. I'd gotten up from bed to make the trek down the house hallway to the community bathroom. Our room was unusually dark, pitch black in fact, illuminated only by what I perceived to be flashes of lightning coming from the windows. The electric light wasn't working so I'd lit an oil lamp that was on the bedside table. Holding the lamp out in front of me, I headed across the room toward the closed door. As I rounded the foot of the bed, holding my lamp a bit further out, I noticed that the sheet on my wife's side was thrown back. In the flickering white light from the windows, her unoccupied nest of sheets and pillows became completely visible. As I approached the door I realized that the flashes of light were not coming from the windows as I had surmised, but from the gap underneath. As I started down the hallway to investigate, I was repeatedly struck by what was to my unadjusted eyes blinding bursts of this light, emanating, to my amazement from the open kitchen door down at the end of the hallway. Oddly, as I walked it began to feel as if the passage of time was slowing and physical movement was becoming laborious, difficult. The short trip down the boardinghouse hallway was turning into a long, tedious journey. The violent bursts of light were increasing in intensity and had become almost continuous now. After finally arriving at the kitchen door, I put my oil lamp down on the floor, reached up and placed one hand on the door frame, and attempting to shield my eyes with the other, peered around the corner and into the room. At that moment, the blinding bursts of light stopped. I picked up the oil lamp, still burning, lifted it up and took a step through the doorway and into the kitchen. Just then the initial crackling of a thunder clap broke the silence. I began to feel as though I was disconnecting, losing touch with reality, falling into the unyielding grip of panic. Then the final thunder crash came, like heavy artillery. I had always had some measure of control of my life but now I was completely helpless, without strength and with absolutely no say in the course of what was beginning to look like the shadow of my death. My knees started to give way. I began to sink to the floor, head bowed, arms hanging limp at my sides. I was drifting away, floating out of reach like a carnival balloon from the hand of a child, coming apart like weightless particles in empty space. I was choking on smoke that smelled of burning lamp oil, floor wax and hardwood. Then in the distance I recognized the sound of my wife's voice speaking my name and I felt my shoulder being firmly shaken. Only partly conscious now I began to sense a commotion around me. Then all at once with the click of the wall light switch a cold incandescent light sprung up from the fixture above. Through the haze of smoke, I could see a pair of feet in pink bedroom slippers. My wife had smothered the fire with the blanket she'd wrapped herself in and was trying to get me up and out of the smoke-filled boardinghouse kitchen. There had been a freak November thunderstorm, and I'd been sleep walking as I'd been known to do.