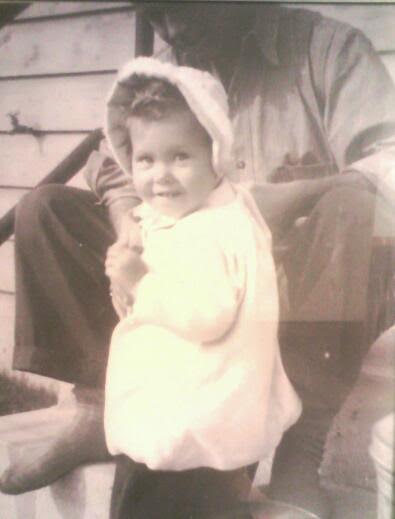 Like some of you, God blessed me with the most loving and devoted parents a child could hope to have.

As the pages unfold of my childhood memories, it occurred to me that a good part of my life, I waved or tried to see Daddy one last time before he disappeared from my sight.

Daddy got this crazy notion to join the Navy his idea of stability and a great career.  Not too bad of an idea, except for the fact my parents lived in Edmonton where there isn’t an ocean, not to mention the fact that Mom was pregnant with me. And all her family as well as Dad’s were there. This meant he was to set things up in Victoria before Mom gave birth, then she was to fly to Victoria to start a new life with a sailor, a new baby and living in unfamiliar territory, with no family or friends around. Mom really loved him to agree to all of this, since sailors are hardly ever home.

He wasn’t there when I made my entrance.  This would be the first of many missed events.  He wired Mom beautiful flowers and card; these words were in all the cards and letters, he sent in the years to follow.

Sorry I wasn’t there. I miss you both. See you soon. Love always and forever, Johnny.

At one month, I had my first plane ride to Victoria, Daddy anxiously waiting for us. This was the first time he held me in his arms and of course, he probably couldn’t take his eyes off his little princess. Fast forward through all of the adjustments Mom made friends, learned to drive,( that was a hoot) and settled into the routine of a sailor’s wife and mother.

By the tender age of six, Dad was truly the love of my life.  There’s a special bond between a father and his little princess that grows deeper throughout the years. I’d see other fathers home more often than mine and wonder why he was away so much.

In between trips, I treasured the time he had at home. We played baseball, he taught me to ride my bike and just shared quiet times together.

When he was home between trips he still had to go to work at the Naden Base. Usually the mornings were wet, cold and dark, with the fog-horn bellowing in the distance. On these mornings the front door closed which meant he was on his way, walking up the long road past my bedroom to catch the bus to Esquimalt. Jumping out from the bed, I ran to the window to wave good-bye. Dad would look up, we waved to each other he would turn and proceed to walk up the road to the bus stop, hands pushed into the pockets of his overcoat, the rain pelting on his white cap. My cheek was pressed hard against the window as I watched him one last time before he disappeared from sight.

When he had to sail away to some distant country, the good-byes were the hardest. The longest time we spent apart, I was about thirteen.  He was drafted to Halifax for a year. He had been gone for nine months, when without warning one evening, there was a knock on the front door. I answered it and there, to my surprise, stood Daddy, smiling holding his bags. Stunned, I couldn’t speak. I turned and ran to get Mom.  Needless to say we were elated. (He had gotten a week’s leave because of his mother’s passing.) Unfortunately he had three months left to serve before the year was ended. This good-bye was the hardest.

Mom and I drove him to the bus station so he could take the bus to the airport. The night air was damp and rather desolate when we dropped him off. We cried and hugged each other, promising not to look back, but as we drove away I had to glance back one last time, tears streaming down my checks.

I love you Daddy! I sobbed.

By the dim station light, he bent down to pick-up the duffle bag, wiping his eyes with his handkerchief.

In the years that followed, he retired after serving twenty-five years in the Navy. We moved back to Edmonton. What a change for me after growing-up in Victoria. He retired from two more good jobs I got married, and had three children. Unfortunately on December 13, 2000 my beautiful mother passed away from cancer.  We missed mom so very much. I became his world.

For the time we had together, he’d cut my grass, come shopping, help clean the house, along with other tasks so as to feel useful. Our long walks were an important part of our lives. It was a time to reminisce.

“No never. You are my princess and that’s all that matters,” he replied teary eyed.

Every evening at 9:00 p.m. we’d phone, chat for a bit and say good night, but this one particular evening he sounded terribly weak and hadn’t gotten out of bed. I found this alarming. My son and I raced over to check. Daddy looked like death, he was so pale. Trying not to panic I hugged him tightly then phoned the ambulance.  The doctors whisked him into a little cubicle. The only man in my life who I loved and adored was on the verge of passing away.  My knees buckled and heart breaking I overheard one of the doctors asking Daddy if his affairs were in order.

“This isn’t happening, he can’t leave me,” I sobbed.

Sitting in the waiting room, watching people come and go, everyone looking sad, tired and hurting, all I could do was stare at the clock and curl up in the chair waiting for some good news. At four in the morning the doctor came to me and said to go home, Daddy had pulled through and was resting. I broke down and cried tears of joy.

Driving home with my son, I realized how close I came to losing him. Life can change in a heart-beat, just as it had with Mom. Nothing can prepare us for the loss of a loved one.

I crawled under the covers when I got home, for a few hours of rest.  Daylight appeared and the phone hadn’t rung.  No dreaded call.  I rushed to the hospital, found a parking space then preceded to information to find out what room he was in.

Quietly opening the door I tipped-toed up to the bed.  Poor Daddy had some tubes and IVS hooked up to him, but he didn’t hear me enter. Through tear filled eyes I stroked his forehead while he slept. The doctor later told me that he had fluid around his heart causing pressure.

As the weeks passed I visited him almost every day. I could see the improvement in his health; he even got a television in his room.

“Hi, my princess, there’s an old movie on, come and watch it with me,” he’d say.

I thought he’d be coming home, but after two months, he took a turn for the worst. One evening I entered his room and found him sitting on the chair. I leaned over and kissed him.  He looked so well groomed but his face was that of a child.

In a whispered voice he said, “The pastor was here today and everything is in order.”

“Don’t say that Daddy. You’re coming home. You can’t leave me,” I cried.

Holding onto him tightly, I saw him grimacing in pain so I led him to bed, tucked him in,

where he fell asleep. Gazing upon his sweet face tears rolled down my cheeks.

A few days later the hospital phoned saying dad had passed. Walking towards the room reminded me of the same as my mother years before.

Now I stood beside the bed shaking, crying and numb with disbelief, unable to leave him. I fixed the covers under his chin, touched and kissed his forehead for the last time.

How could I ever exist without this beautiful person who had been my father, best friend and mentor for fifty-four years? The most loving father a girl could have, who taught me to ride a bike, play ball and so many other things in life, but most of all gave me his unconditional love.

Standing next to the brown casket, I look down into the open plot knowing Mom is waiting for her soul-mate of fifty-three years.

The sun shone brightly down upon the lonely flower covered casket, the limo turned the corner, tears streamed down my face, as I turned around to see the casket one last time.

I will love you always Daddy! I wept.

I will someday embrace my wonderful parents and there will be no more one last time but forever.